There are no scheduled instances of An Evening With Lenny Henry–Who Am I, Again?(Work in Progress).

An Evening With Lenny Henry–Who Am I, Again?(Work in Progress)

There are no scheduled instances of An Evening With Lenny Henry–Who Am I, Again?(Work in Progress). You can view similar events below. 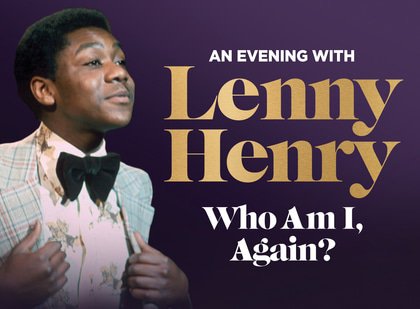 Join the legendary Sir Lenny Henry as he embarks on a brand new UK tour this Autumn.

Lenny Henry is one of Britain’s best-known and celebrated comedians, with a career which began with cult stardom on children's television to including writer, radio DJ, TV presenter, co-founder of Comic Relief and award-winning actor.

In the first half of the evening, Lenny will take the audience through a jam session of funny and sad memories and stories - from growing up in the Black Country, puberty, school, friendship, family secrets and unashamed racism. With his mother's mantra of 'H'integration' echoing in his ears, Lenny will recount setting out on his rollercoaster ride of a career - but at every stage wondering: Am I good enough? Is this what they want?

In part two, Lenny will be interviewed by author, co-writer and friend Jon Canter, for further insights into his life and career, followed by questions from the audience. Come and enjoy these honest and tender stories, told with a glorious sense of humour and help Lenny figure out ‘Who Am I, Again?'

about 10 hours ago Fancy a trip to the movies with your little one this week? Catch a #BringBaby screening of The Railway Children Ret… https://t.co/LcuumaaOg8