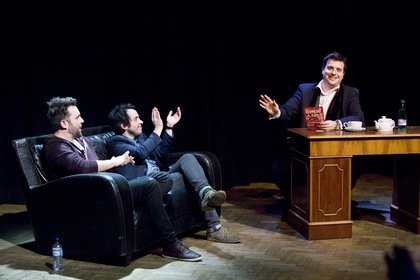 The magic show where the world’s finest trick artists perform headline sets before sharing their insights about the mysterious world of illusion.

Danny presents three of the biggest names in magic for an evening of illusion, card tricks and mystery in a chat show revealing how a magician’s mind works.

WHY? Featuring mindreader Luke Jermay and close up magician and sleight of hand artiste Laura London

Just announced! Danny will also be joined by Andi Gladwin who has been voted Number One Close-Up Magician by the Magic Circle.

about 13 hours ago This summer we're hosting two live streamed jazz gigs, direct from our Courtyard stage. On Fri 24 Jul we welcome A… https://t.co/EZv8vSyU9h

about 16 hours ago AND - Grown ups and their children can connect through movement and breath with Sunday's Big Dog, Little Dog: Paren… https://t.co/qnwr8IGdzy

about 16 hours ago There's not just one, but two opportunities for little ones to explore yoga this week! Ages 5 - 11 years look at… https://t.co/3mlgDf2B8D

1 day ago The next free Zoom lecture from our friends at Maidenhead Heritage Centre is Maidenhead at the Movies on Wed 15 Jul… https://t.co/bOahNs2yzk

2 days ago Our much-loved Kite Making Workshops are going online this summer holiday! Get involved in a workshop via Zoom, the… https://t.co/ebQHWxqHEW

2 days ago RT @littleanklebite: Thanks to everyone who joined our Virtual Little Ankle Biters #Awards on #supersaturday The Winners for #Berkshire w…

3 days ago RT @Windsor_Museum: Do you have an #Object or #Collection at home that you would put into a #VirtualExhibition given half the chance? Share…