There are no scheduled instances of David Baddiel - My Family: Not The Sitcom (Special Preview).

David Baddiel - My Family: Not The Sitcom (Special Preview)

There are no scheduled instances of David Baddiel - My Family: Not The Sitcom (Special Preview). You can view similar events below. 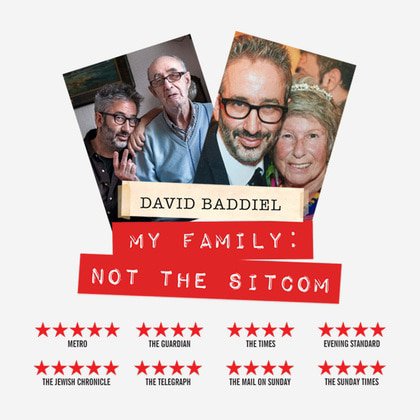 My Family: Not the Sitcom is a show about memory, ageing, infidelity, dysfunctional relatives, moral policing on social media, golf, and gay cats.

A massively disrespectful celebration of the lives of David Baddiel’s late sex-mad mother, Sarah, and dementia-ridden father, Colin. Come and be offended on David’s behalf!

‘Hugely funny…If you’re going to disrespect the dead and the incapacitated, do it like this: truthfully, inventively and, finally, lovingly’ The Times

‘Rare to see one that draws its subject as honestly, vividly and humorously as this’ The i

‘An exceptional piece of comedy’ Den of the Geek

10 minutes ago RT @MaidenheadAds: A petition calling for the council to rethink its plans to cut grants funding for arts centres in the new financial year…

10 minutes ago RT @windsorobserver: How cool is this?! Simon Mole and Gecko show their support for Norden Farm! Read the full story here: https://t.co/…

about 21 hours ago RT @LarchfieldPrim: Our Nursery had lots of fun this week, they had a real Magician come in and he brought a real rabbit!! @nordenfarm htt…

2 days ago RT @I_Jay: If you care about the future of @nordenfarm and want any future for access to all for the arts and creativity in Maidenhead and…