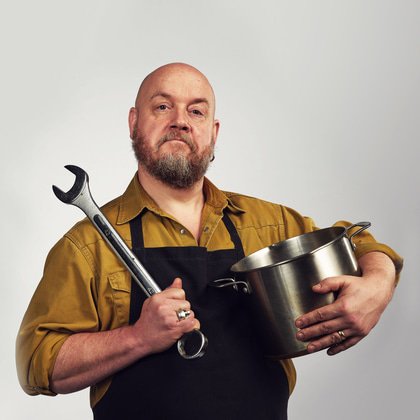 Brand new comedy from the stand-up who cooks on stage.

In this show he’s on the road! It’s time for Planes, Trains and Automob-meals.

George demonstrates how to cook with an engine, procure items from the train buffet trolley and turn unexpected roadworks into a picnic. Three plates of gourmet food cooked live in the most unconventional ways and with the opportunity to taste the results at the end, provided you can stop laughing.

WHY? 'Brilliantly funny' The Guardian

'Trust us, you won’t believe how good the food tastes' The Scotsman

about 19 hours ago Explore imaginative themes and adventures through dance, song and mime with our online Little Wrigglers sessions ev… https://t.co/a2ScWBAUIN

4 days ago This morning our fabulous Box Office Assistant Tessa set out from Norden Farm on her #magpies150challenge to walk 1… https://t.co/q3tekX8x8W

5 days ago Our wonderful Box Office Assistant Tessa will be walking 15 laps of the Altwood/Boyne Hill area over the next 3 day… https://t.co/qTGpdXbvzz

6 days ago In tomorrow's online Magic &amp; Storytelling session, Patrick will be telling the story Not Now Bernard by David McKee… https://t.co/VuHBTEh4gG

6 days ago This week's online classes line up features our brand new Zen Drawing course, magic and storytelling rolled into on… https://t.co/X03FJ8lI8x

6 days ago RT @MUFCYorkRoad: have a target of £ , for our #Magpies150Challenge by walking miles over days! What…

7 days ago This summer we will be hosting two live streamed jazz concerts, programmed by the late Pat Kelly and honouring his… https://t.co/KGktuwYPmo