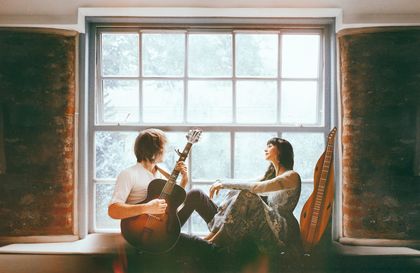 Their autumn tour accompanies the release of 2019’s trilogy of singles celebrating the ‘spirit of place’. Their material is as joyful as it is intense, but the common factor is the duo’s warmth and confidence in each other; their natural ease and connection is clearly evident on the recorded music, and a genuine pleasure to witness on stage.

WHY? ‘A stream of brilliant music – they should be rated among the elite when it comes to UK folk’ Maverick

about 8 hours ago Looking for something to read with your afternoon cuppa? Check out this week's #PickYourOwn blog from our Artistic… https://t.co/0YuXnKhfH2

1 day ago @MyWorkSpotUK It looks great!

1 day ago In the mood to get crafty? In today's video Kayleigh shows you how to make your own stress ball. We'd love to see… https://t.co/GKWpvgoxrL

4 days ago Looking for something to watch this weekend? How about a gorgeous fairy-tale opera from the Royal Opera House as pa… https://t.co/frWa23KAjc

4 days ago ⭐️Just added to our digital line up - Youth Dance is heading online for a special 4 week term! ⭐️ An energetic week… https://t.co/tzMJugZhtF