Honey and The Bear 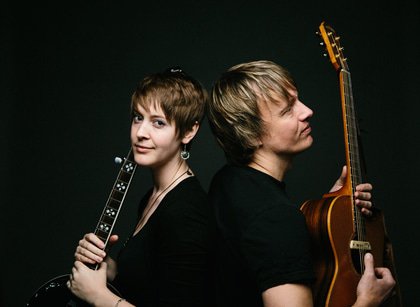 With a diverse range of sounds and textures, and rhythms that flow from the fast and furious to gentle ballads, their live performances are spirited and dynamic.

The multi instrumentalist pair, comprised of songwriters Jon Hart (guitar, bass, bazouki) and Lucy Hart (guitar, ukulele, bass, banjo, mandolin and percussion). They are accompanied by fellow musicians Evan Carson and Toby Shaer (both of Sam Kelly & The Lost Boys). The duo are touring with their brand new album Made in the Aker.

WHY? Conjuring stories in song, they tell tales of Suffolk folklore, courage, passion and heartbreak

about 22 hours ago Like your stories with a magical twist? We have the perfect activity for you this summer! Join actor, magician and… https://t.co/lU1KVDjXMp

3 days ago Sit back, relax and let your living room be transformed into an intimate jazz club with our live streamed gig from… https://t.co/QKeHEVNpYg

5 days ago Explore your creativity at our FREE Poetry Workshops! Following on from the successful All Write Together writing s… https://t.co/JBGRARvTkk