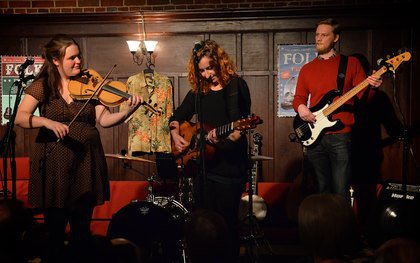 In their solo careers they have both worked closely with bass player Pete Thomas. He accompanies them, combining their vocal harmonies, viola, guitar with double bass.

WHY? Both are BBC Folk Award Winners

about 2 hours ago Hooks and yarn at the ready for our next online Crochet Social on Wed 3 Jun 6pm! Tickets are £2 --&gt;… https://t.co/uHvjqmbHXy

1 day ago Looking for something to read with your afternoon cuppa? Check out this week's #PickYourOwn blog from our Artistic… https://t.co/0YuXnKhfH2

2 days ago @MyWorkSpotUK It looks great!

2 days ago In the mood to get crafty? In today's video Kayleigh shows you how to make your own stress ball. We'd love to see… https://t.co/GKWpvgoxrL

5 days ago Looking for something to watch this weekend? How about a gorgeous fairy-tale opera from the Royal Opera House as pa… https://t.co/frWa23KAjc

5 days ago ⭐️Just added to our digital line up - Youth Dance is heading online for a special 4 week term! ⭐️ An energetic week… https://t.co/tzMJugZhtF