The Thinking Drinkers - Heroes of Hooch 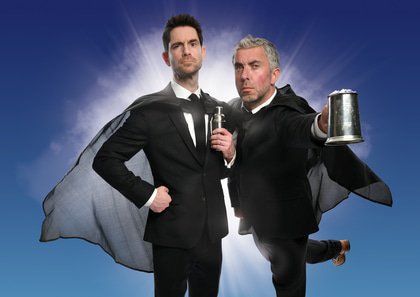 The Thinking Drinkers return with a brand-new show, a hilarious and intoxicating look at history’s greatest drinkers.

Enjoy five free drinks as the award-winning experts reveal how alcohol has inspired pioneering explorers, politicians and painters in equal measure, from Plato and Picasso, to Nelson, Napoleon and Norm from Cheers. You'll learn a lot, laugh a lot and, don't forget, you get five free drinks.

WHY? ‘Pioneers of alcohol based comedy’ ★★★★ Sunday Times

‘A terrific show. The best value for money in town’ ★★★★ The Scotsman

about 4 hours ago We love an excuse to get creative at Norden Farm! Yesterday the team caught up online and took part in a fabulous a… https://t.co/NW8vLZHOF3

about 5 hours ago Been enjoying our weekly craft videos? #KayleighsCrafts will be going live via Zoom from Thur 11 Jun! Join Kayleig… https://t.co/Y6DkmaoNzq

1 day ago Tickets are £5 per household ➡️ https://t.co/R3ByJh4gE6 Book through the link above and 20% of your ticket purcha… https://t.co/Wuwdnj1Rrq

2 days ago It's Volunteers Week and we would like to give a huge shout out to our wonderful team of volunteers! They support u… https://t.co/BoKxnddUhR