Why Mummy Doesn’t Give A **** - An Evening with Gill Sims 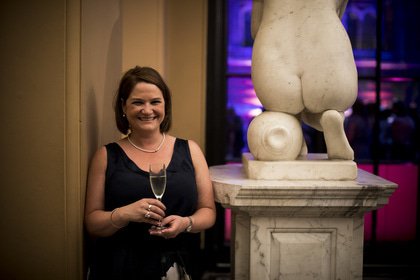 Author of online sensation Peter and Jane, Gill Sims is the number one best-selling author behind Why Mummy Drinks, its follow up Why Mummy Swears and the recently announced Why Mummy Doesn't Give a...

Join Gill as she is interviewed about her blog, books, character and much more! There will be readings from her books and also a chance to ask Gill questions from the audience. Books will be available to purchase and sign as well.

Why Mummy Drinks spent over six months in the Sunday Times bestsellers Top Ten and was the number one bestselling debut hardback novel of 2017. Gill's second book Why Mummy Swears, published in early 2018, was a Number One Sunday Times bestseller for seven consecutive weeks and has spent a total of 18 weeks in the Top Ten. Since publication of her first book just over a year ago Gill has sold over half a million books.

Mummy has an idea... when she can get away from all the other ideas, that the world is full of mums who go to advanced yoga classes, get tiddly on a half glass of white wine, and attend polite book clubs.

Mummy does not want to go quietly into that good night, of women with sensible haircuts who live only for their family and stand in the playground trying to trump each other by bragging about their offspring's academic achievements, extracurricular activities, and their latest overseas holidays.

Instead, she clutches a large and full glass of wine, muttering 'FML' over and over again, until she remembers that great idea...

about 20 hours ago This summer we're hosting two live streamed jazz gigs, direct from our Courtyard stage. On Fri 24 Jul we welcome A… https://t.co/EZv8vSyU9h

about 23 hours ago AND - Grown ups and their children can connect through movement and breath with Sunday's Big Dog, Little Dog: Paren… https://t.co/qnwr8IGdzy

about 23 hours ago There's not just one, but two opportunities for little ones to explore yoga this week! Ages 5 - 11 years look at… https://t.co/3mlgDf2B8D