Al Murray - Landlord of Hope and Glory (work in progress) 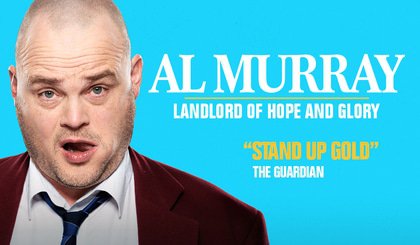 Citizens of Hope and Glory! Our new tomorrow beckons. A new tomorrow that smells reassuringly of yesterday, but with wifi.

One last heave and we will be there. And when the going gets tough the tough get going. Although the going won’t get tough and anyone who tells you it is going to be tough is lying.

Come join me to marvel at the majesty of our green and pleasant land. A land globally renowned for our culture, history and places, like the world-famous Salisbury Cathedral.

Join me to step backwards into the future.

WHY? ‘Stand up Gold’ The Guardian

about 21 hours ago This summer we're hosting two live streamed jazz gigs, direct from our Courtyard stage. On Fri 24 Jul we welcome A… https://t.co/EZv8vSyU9h

about 24 hours ago AND - Grown ups and their children can connect through movement and breath with Sunday's Big Dog, Little Dog: Paren… https://t.co/qnwr8IGdzy

about 24 hours ago There's not just one, but two opportunities for little ones to explore yoga this week! Ages 5 - 11 years look at… https://t.co/3mlgDf2B8D