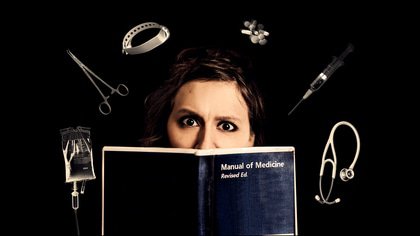 Helen Seymour admits you into a surreal hospital to create a funny, unique and powerful theatrical experience. It blurs the boundaries between spoken word, comedy and performance art.

So come on, be on the look-out while Helen sneaks around wards, X-ray rooms and cupboards to discover the bizarre, the bemusing and the ba… ah, well that would be telling.

WHY? A witty, thought provoking analysis of sickness, health and what it really means to recover

This tour is presented by house

A Celebration of Life

The power of poetry, celebrating life from childhood to twilight. An emotional, funny and heart-warming show.

A pre-recorded event from Maidenhead actor Clive Woodward, live streamed on Sunday 14 June 4pm. Clive performs his much loved show, A Celebration of Life, to raise funds for Norden Farm during this challenging time due to the ongoing Covid-19 crisis. All ticket revenue will go directly to supporting Norden Farm.

Based around poetry, the performance often reflects on Clive’s varied and interesting life and includes amusing anecdotes and a splash of music.

Poems from childhood to twilight provide a powerful, emotional and fun afternoon – allowing you to reflect on and celebrate life. A perfect tonic at this time and geared to make you think, reflect, laugh and observe life during these unprecedented times.

Clive has acted in films, theatre, BBC radio plays and TV productions. He has performed his own shows A Celebration of Life and You, Me, Colin and Helen at various theatres. Clive is also a former national motor racing champion and commentator.

Find out more about the ways you can support Norden Farm here.